In the surrounding area, large-scale redevelopment projects such as "The Okura Tokyo", "Toranomon Hospital" and "Tokyo World Gate" have been newly completed. Following the second circular line that runs through the basement of "Mori Tower", including transportation infrastructure such as "Toranomon Hills Station" and Tokyo BRT, housing, hotels, commercial facilities, medical facilities suitable for the international new city center and global business center Various urban functions are being developed.

Tokyo BRT etc. arrives and departs at the bus terminal on the first floor of "Toranomon Hills Business Tower". We also have a pedestrian network that considers barrier-free connections between the surrounding urban areas. In addition, the opening of the second ring line will enable smooth access to Haneda and Narita airports, and Toranomon Hills will be the gateway to Tokyo, connecting the world to the city center.

Oval plaza of "Toranomon Hills Mori Tower", green of the lower part of "Business Tower" and "Residential Tower" are continuous. In addition, we will create a new green network by connecting the adjacent Atagoyama and the greenery of Atago Green Hills with a green path. 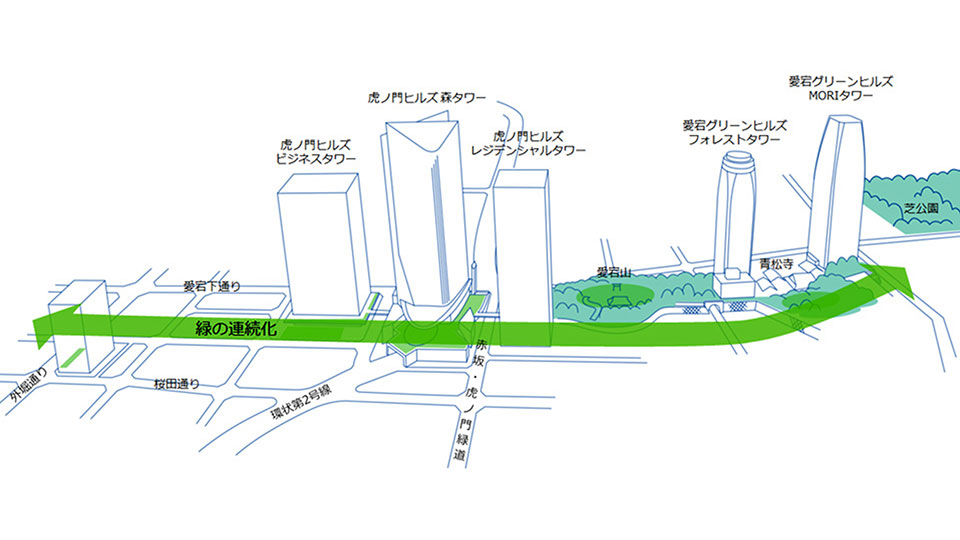 Functions as a local disaster prevention base Build your own energy network

An original energy plant that supplies electricity and heat is installed in the Toranomon Hills area under the business tower. In order to improve the efficiency of energy use and strengthen disaster prevention functions, we have introduced a private power generation system such as a gas cogeneration system (CGS) and a high-efficiency heat production system that utilizes large-scale water heat storage tanks and waste heat utilization equipment We will build an energy network with consideration.
In addition, by providing the electricity and heat necessary to continue urban functions even in the event of a disaster, it will contribute to the safety and security of the Global Business Center. 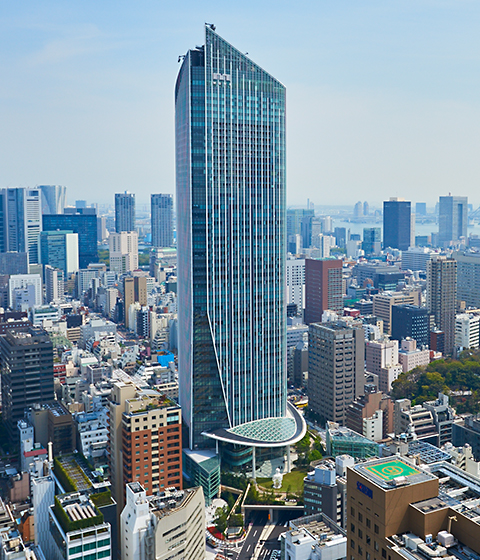 The Toranomon Hills Mori Tower, a 52-story building with a height of 247m, is a symbolic project in which the Tokyo Metropolitan Government works together with the Ring Road Line 2 using the multilevel road system. It is located in the "Asia Headquarters Special Zone" that promotes the attraction of foreign companies. Office tower centered around large-scale offices and commercial facilities on a global level. We will also open an incubation center called “ARCH” to nurture salons and innovators for entrepreneurs and executives of large companies, and support the creation of new businesses from the Toranomon Hills area. In addition to being connected to Toranomon Hills Station on the Hibiya Line and Toranomon Station on the Ginza Line, there are bus terminals on the first floor that can connect to the Tokyo BRT and the airport limousine bus that connect the city center and the coastal area. It also functions as a gateway to Tokyo that connects the world with the city. 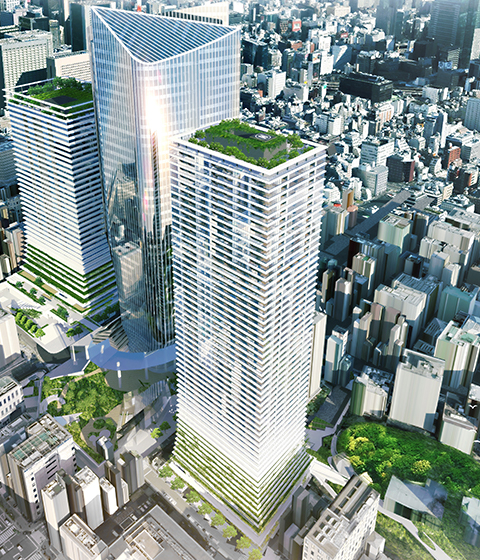 It is a 54-story residential tower designed above the Toranomon Hills Business Tower, while respecting the presence of the Toranomon Hills Mori Tower. Mori Building's high-end residential brand "MORI LIVING" As the highest-class homes in the series (approximately 550 units), we thoroughly focus on the details and provide a unique Japanese home. In addition to having a membership-only "Hills Spa", we will establish a commercial space of about 1,000 m2 in the lower part of the building, and by connecting it to the "Mori Tower" and "Business Tower" through the deck, we will enhance the mobility of the Toranomon Hills area. 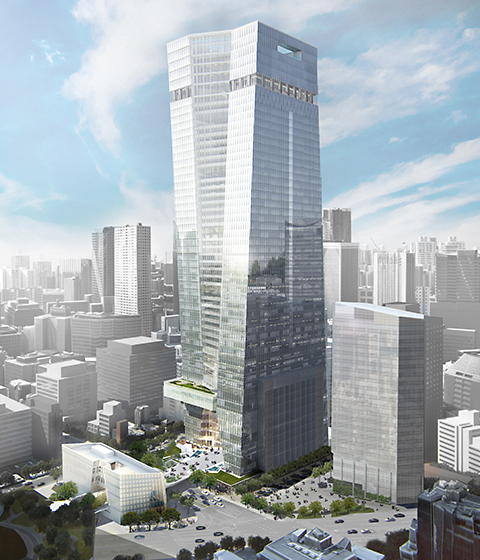 It is a super high-rise tower that is developed integrally with "Toranomon Hills Station" on the Tokyo Metro Hibiya Line. In addition to the lively open space directly connected to the station, a multi-layered pedestrian network has been realized by developing a pedestrian deck on Sakurada-dori. It will be a new transportation hub for the Toranomon area.

The super high-rise tower, which has 49 floors above ground and a height of approximately 265m, has offices with a standard floor of approximately 1,000 tsubo, commercial facilities integrated with the plaza, and international-standard hotels. In addition, we will place a multifunctional complex with forums, galleries, restaurants, etc. for various business events at the top, aiming to become a hub for new business and innovation. 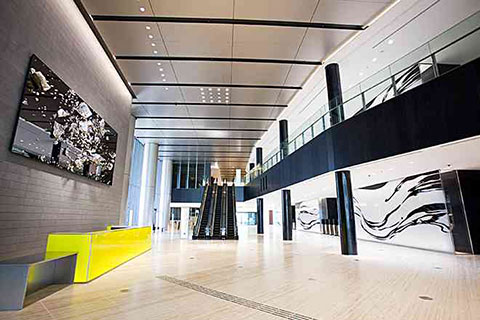 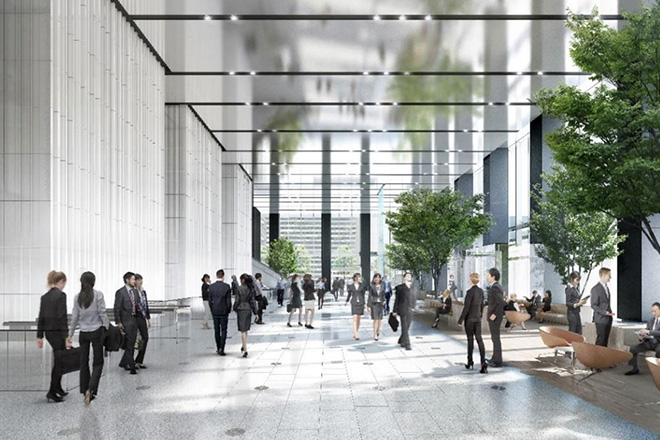 work. eat. have fun. Rest. learn. Get healthy Get stimulated. Toranomon Hills Residence is a location where you can enjoy the best of Tokyo.
Living in a compact city, all within walking distance. A sense of security brought about by outstanding hospitality, advanced seismic performance, and security. International communities and new encounters and new ideas born from them. Toranomon Hills Residence offers a new lifestyle and lifestyle to live in Tokyo. 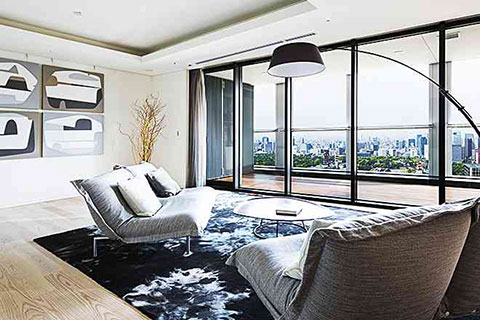 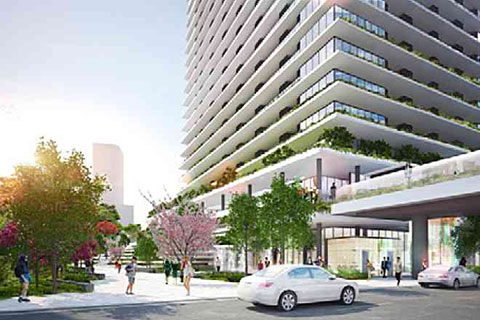 "Toranomon Yokocho" is a collection of 26 famous and popular stores in Tokyo, which had not been opened in many stores until now. You can enjoy the gem menu of various shops as you can order a la carte even at shops that only offer courses at the main shop. In addition to cooking, you can also pair the taste of your favorite shop with your favorite sake in a craft gin distillery made from the famous water of island shochu and ome in Tokyo, or BYO (Bring Your Own) style if you buy wine. There is also a "HAND PICKING WINE" that you can enjoy. In addition, “Toranomon Yokocho POPUP Restaurant” supervised by Mr. Mackey Makimoto, who was in charge of the store selection of “Toranomon Yokocho”, will be a hot topic store for a limited time.

Toranomon Hills In the commercial area from the 1st floor to the 4th floor of Mori Tower, with the concept of "Communication Hub", we support restaurants and office workers who can enjoy food from around the world to meet the needs of customers in Japan and overseas. Place a service store to do.
Toranomon Hills A total of 58 commercial spaces (about 7,600 m²) will be created on the 1st basement floor to the 3rd floor above the business tower to support global players' clothing, food, and living, from food and beverage to product sales and services. It is the largest conference facility in the area, with approximately 2,000 people in three halls. It is composed of three pillar-less, separable halls and a meeting room, and is an ideal space for holding various events such as international conferences and symposiums. It is easily accessible from Haneda Airport and aims to be a new hub for international exchange and information dissemination as a hub connecting Tokyo and the world. 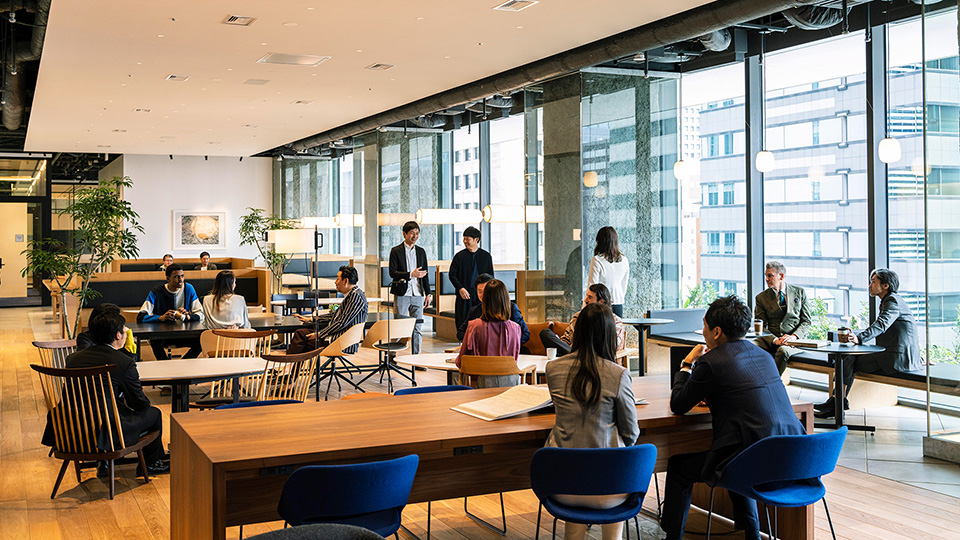 On the 4th floor of the Business Tower, a large-scale membership-based incubation center of about 3,800 m², called “ARCH”, has been created, which is one of the important components of the “Global Business Center”. In the facility, we will set up a meeting room, a cowork space, a school room, etc., and in the planning and operation of the facility, based in the US Silicon Valley, we will conduct venture investment and fostering business as well as support business creation of large companies. WiL” is participating. Experts with a track record of creating new businesses of large companies will provide strong support by providing various know-how, services, educational programs, awareness events, etc. necessary for creating new businesses while promoting communication between members. I will.
This facility aims to become a base for Japan's unique innovation ecosystem by supporting business reforms and new business creation within large companies that have abundant resources such as people, goods, money, and information. 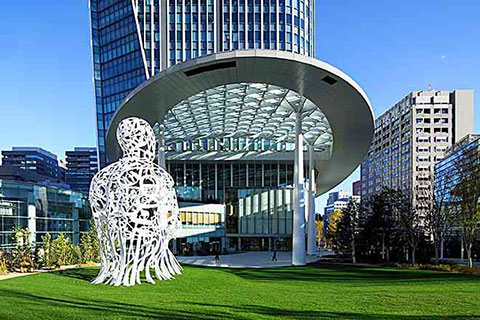 It is an open space with a vast lawn. The "Toranomon Hills Mori Tower", which utilizes the "3D road system" that allows buildings to be built above and below the road, has a circular Route 2 that penetrates underground to open the ground to pedestrians and greenery. We have created a space where visitors, including local residents and office workers, can enjoy a leisurely stroll and greenery. 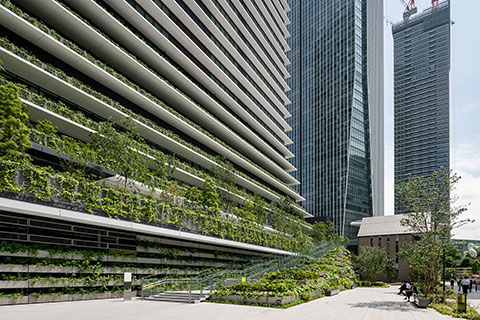 Nishizakura Park is a green park with an area of about 1,500 square meters. It is connected to the pedestrian deck and is maintained to form a green network that connects to the adjacent Atagoyama greenery and green paths. In spring, you can enjoy various cherry blossoms such as Kanzan, Yoshino cherry tree, Kanhi cherry tree. 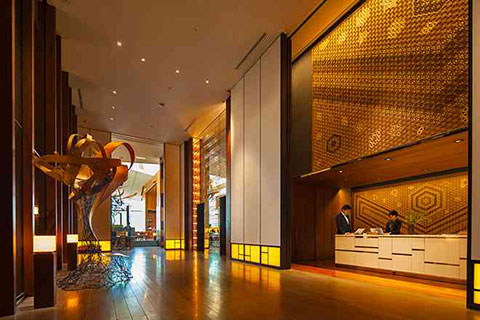 Hyatt's luxury lifestyle hotel Anders Tokyo, which means "personal style" in Hindi, incorporates the individuality and charm of the region to provide a comfortable yet stimulating stay. Located in the heart of Tokyo for leisure and business, each guest will enjoy a cozy and quality time in their own style, while enjoying a beautiful panoramic view from Andaz Tokyo.

It is a new symbol street of Tokyo that was maintained together with "Toranomon Hills Mori Tower". As area management activities, we carry out various devices and events that are suitable for transmitting domestic and overseas culture and information. Around Shintora-dori Avenue, "SHINTORA-DORI CORE" was born as the first project to realize the integration and reorganization of the block. In addition to an office with a total rental area of about 10,000 m², an incubation office of about 600 m² is installed on the 3rd floor. In addition to a casual and easy-to-use restaurant, the space on the 1st floor facing Shintora-dori Avenue has an event space function. We also opened the combined cafe "THE CORE KITCHEN/SPACE". Meeting a variety of people, to chat, as a place for a new community that produce ideas, also as a base for area management activities, from here Shintora-dori Avenue to create the bustle of the area, by pulling the roadside development, Toranomon Hills area Contribute to the evolution and development of.

In "Toranomon Hills", in order to play a role as the origin of culture, we have installed works throughout the world where artists representing today think about the future that Tokyo and Toranomon Hills should have. ..
You can feel more familiar with it than you can with a museum-like work. I hope that this will create a new and wonderful relationship between art and people. 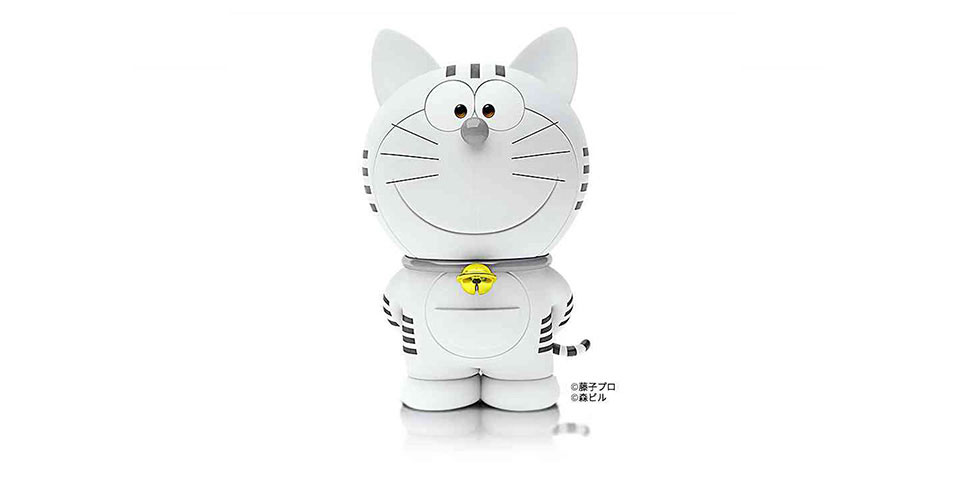 Hello everyone. I have been riding a time machine since Tokyo in the 22nd century.
It is a cat business robot, TORANOMON. What did you come for?
That is to create "Mirai Tokyo" with everyone. Many ideas for innovating the world are shaped here.
Now, "Mirai Tokyo" starts from Toranomon Hills. 22nd century Tokyo is...